CASE STUDY: Technology for a ‘get it right, first time, every time’ ethos 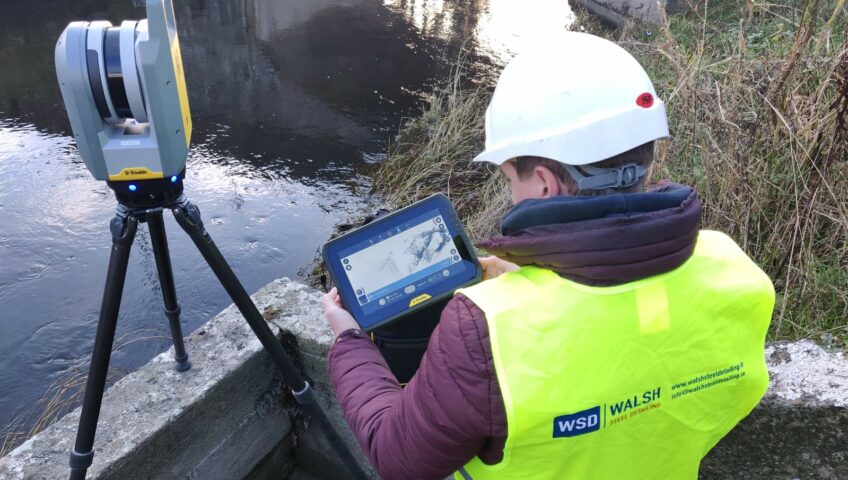 CASE STUDY: Technology for a ‘get it right, first time, every time’ ethos

Walsh Steel Detailing has invested in Trimble 3D Laser Scanning and Mixed Reality technologies as part of a process that both vastly improves their site/office workflow and ensures that there will be no surprises for their clients or team when an intricate project goes to site.

“If we didn’t have this technology, we simply couldn’t do the work we are doing. We are market leaders for two reasons, our people and the technology that we have invested in.”

Established in 2017, Walsh Steel Detailing Ltd was the result of founder Damian Walsh spotting an under resourced area of the market that he felt could be well serviced by his steel industry knowledge, contacts and interest in technology. Aware that there was a shortage of steel detailers in Ireland and that there would be good take-up  for a company that could provide an ‘on-demand’ service to smaller fabricators, he therefore launched Walsh Steel Detailing.

Based in Co Mayo, the new company would focus on meeting the needs of those fabricators that often found themselves unable to tender for works because they did not have the capability to produce drawings to the required level or were unable to justify the costs of a full-time draftsperson and relevant software. The aim of WSD would be to offer advice early in the detailing process backed up by extreme attention to detail and a ‘get it right first time, every time’, ethos to ensure that there would be no surprises when a complex project went to site.

Since its inception five years ago, WSD has successfully executed and delivered high profile jobs for large companies across Ireland and the UK and is now one of Ireland’s fastest growing steel detailing service providers. With a reputation that’s been built on solid relationships with small, medium and large organisations that specialise in structural engineering, traditional construction and modular construction, WSD is aiming to keep ahead of the game with a commitment to technology that will further enhance the service it can offer its clients. Most recently, this has seen Damian invest in both 3D Laser Scanning and Mixed Reality.

Technology for a ‘get it right, first time, every time’ ethos

As an established user of Trimble’s Tekla Structures (powerful structural BIM software designed for the creating, combining, managing and sharing of information-rich, accurate, 3D models), the company was adept at producing high quality drawings for their customers. However, Damian was aware that a great design team and good software were just a part of the story and that if there were to be further safety, efficiency and productivity gains for WSD’s clients, then this would lie with a closer look at digital hardware.

As a follower of Trimble on social media, he was familiar with both 3D Laser Scanning and Mixed Reality and felt that this was where his investment should lie.  He therefore approached BuildingPoint UK and Ireland (a Trimble partner and the construction business side of KOREC Ireland) as his first step.

From years’ of experience on site, Damian knew that even the most carefully taken manual measurements could be extremely time consuming to capture and despite the care taken, mistakes could occur with something as simple as 670mm being recorded as 760mm.

He knew that by replacing a manual approach with the introduction of a 3D laser scanner, WSD would be able to generate a point cloud survey, with millions of points, that they could then feed directly into their model. This pinpoint level of accuracy was something that Damian felt would be critical when it came to having the exact space in the model for the design. Site survey time would also be reduced and having a 3D point cloud to work from would significantly simplify the process of modelling a platform around a maze of stainless steel piping.

“The speed with which the X7 process data is unbelievable.”

About the Trimble X7

A Trimble X7 was selected as the best tool for the job and purchased from BuildingPoint UK and Ireland. Extremely easy to use, with a short learning curve, the Trimble X7 offers a number of key benefits. These include, high accuracy point cloud, onsite registration of scans (ability to check that nothing has been missed whilst still on site), fast set up, self-levelling, and importantly, automatic calibration which would ensure the WSD team had confidence in every scan they undertook. This feature also considerably cut costs because the X7 does not need to be sent away each year for this process.

The X7 would be managed via a Trimble Tablet running FieldLink setting out and scanning software which also included the ability to seamlessly import IFC models (supported by Tekla).

The first time Damian saw the Trimble XR10 HoloLens Mixed Reality headset, he was fascinated by both the concept and more specifically, how it could further enhance the company’s ‘right first time, every time’ ethos. He immediately recognised that the ability to see a hologram of the structure in place, before any materials had been procured, or even cut, would greatly reduce rework, enable early clash detection and eliminate unexpected site problems. It would also provide his clients with total confidence in how their structure would look in the real world before any fabrication costs were incurred.

Like the Trimble X7, the XR10 technology has been extremely well received by both the WSD team and the company’s clients simply because, primarily, it takes away the worry of wondering if a complex structure will go together when it reaches the construction site. The X7 ensures that WSD has the exact space in their model from the start for the design, whilst the XR10 enables the model to be checked on site, in position, before fabrication.

WSD also uses Trimble Connect (a cloud-based platform for sharing models and documents), that has mobile, desktop and web accessibility so all stakeholders can easily access the information they need 24/7. It is particularly useful for allowing users to see Tekla models, with full-scale overlay, in the real world when used with the XR10.

Trimble Connect can also be used to mark-up any clashes etc that may have arisen on site post-survey. Marked as ‘to do’, the list is waiting in the office before the team even arrives and consequently nothing is forgotten.

About HoloLens and the Trimble XR10

HoloLens technology incorporates multiple sensors, advanced optics, and holographic processing that merges seamlessly with its environment. These holograms can then be used to display information, blend with the real world, or even simulate a virtual world. The Trimble XR10 system incorporates this technology into an industry approved hardhat that is fully compatible with its Trimble Connect cloud-based collaboration platform.

The end result is a wearable solution that allows for the visualisation of 3D designs, on site by the user and remotely by other team members. This approach encourages real-time collaboration and transparency among stakeholders to avoid errors and delays.

Contracted to model and produce fabrication drawings for 98 balconies on a Galway development, WSD’s client also requested that they survey the stubs which had been installed prior to the outer brick leaf to ensure that any discrepancies would be picked up.

These balconies were out of reach from ground level. Use of the Trimble X7 meant that the work could be carried out quickly and accurately with no need for the additional time and cost requirements of installing scaffolding. Every stub was measured to within 2mm with an excellent level of detail was noted. Additionally, the survey was carried out from ground level keeping the team safe with no compromise in the quality of the data.

Once the balconies were modelled, the IFC model was exported into Trimble Connect and a marker was set out in a known location in the model. Once the model was launched on the XR10, it immediately requests if WSD would like to use the marker. The team could then scan a QR code with the cameras on the XR10 and the model appeared exactly where it was supposed to be in the real world.

“The XR is fascinating and an amazing use of technology to see your structure before any materials have been procured, never mind cut. From the outset, every member of the BuildingPoint UK and Ireland team has been extremely helpful.”

The team felt that the two technologies complimented each other perfectly with the X7 allowing WSD to bring the site to their office so they could model around it whilst the XR10 allowed them to verify the model on site and gain total client confidence in the work they were doing before any material was cut.

Damian concludes, “Our client was thrilled with how seamless the whole process was and had total confidence that they had picked the right company for the job. Likewise, the input from BuildingPoint UK and Ireland has been great with every member of the team extremely helpful – I don’t think there’s a question I could ask on Trimble equipment that they wouldn’t have an answer on there and then. In short, if we didn’t have this technology, we simply couldn’t do the work we are doing. We are market leaders for two reasons, our people and the technology that we have invested in.”

No comments to show.